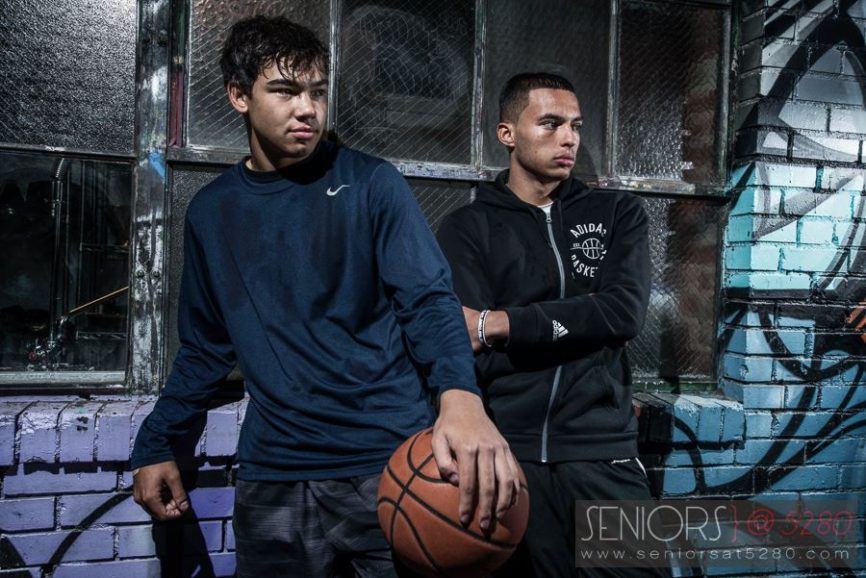 When you’re looking for unique Denver Senior Pictures, you want something more than just downtown in the background. Shooting downtown is an artform. It has a rhythm, personality and vibe that makes it more than just a bunch of buildings downtown behind you in the picture. There is life, moods, shadows, alleys, doorways, all of which provide a small story glimpse into what downtown Denver is like.

We were shooting some downtown sports image. We chose a graffiti alley to show off the grunge and grit associated with street ball. There is a story to be told in each sports photo. We could have settle with each player holding a ball against a wall and do what every other senior photography studio in Denver does. But, we wanted to tell a story, create a mood of late night pickup ball, sweating, waiting your turn on the court when the current game finishes. It’s no rules (or just a few) and it’s for the pure love of the game! Showing athleticism in Denver Senior Pictures is only part of the story, showing the emotion, hard work and play that comprised your rise to the top of your high school sport. Valor Christian has one of the top teams this year in Colorado and these are two of their top players. Watch out for Kayle and Jalen over the next few months of 2017. It should be an amazing year.

Follow all the teams this year for basketball at http://chsaanow.com/sports/boys-basketball/. We follow most of our athletes throughout the year and into college. We’ve had the privilege of shooting some of the greatest athletes in Colorado and the world. We love it all, from peewee league up to the professional and olympic ranks.